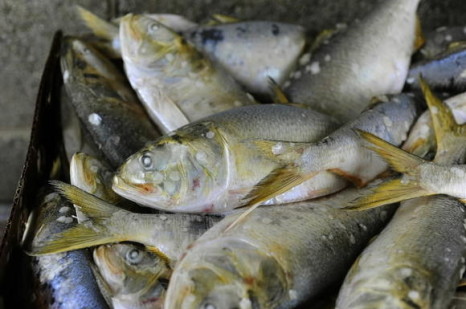 December 14, 2012 — The Providence Journal’s “PolitiFact” unit investigated claims made by Pew Environment Group in advertisements they ran in several newspapers asking east coast governors to support their demand for a 50% cut in the menhaden harvest. Pew justified this demand saying “… in recent years, menhaden numbers along our coast have plummeted by 90 percent.”  The newspaper found the claim to be “Mostly False”. The Providence Journal

Lenfest is a Marketing/PR/Lobbying arm of Pew Charitable Trusts, Pew Environmental Group.  Pew Trust is oil money, ($5.5 billion that they’ll admit to).  It’s run by the grandchildren of Joseph N. Pew founder of Sun Oil or SUNOCO. Pew, EDF, CLF, are 501 C (3)’s that essentially shelter oil money which funds all the faux Environmental NGOs that then do the oil/gas corporations’ bidding; in this case (the matter of the Outer Continental Shelf 5 Year Drilling Plans) getting rid of fishing enables the mega-oil companies to secure future oil reserves contracts (see Steve Coll’s Private Empire: Exxon Mobil and American Power). They (Pew, EDF, CLF, etc.) are decidedly anti-fishing, not only anti-industrial fishing but anti-all fishing including sustainable small family owned and operated boats.  Don’t take my word for it—follow the money.  http://www.fishtruth.net/Connections.htm

The local New England fishing industry has been fighting big oil’s hostile takeover of the ocean for years; they’ve tried to take over Georges Bank in the ‘80’s for the gas reserves in the area and now they’ve focused on grabbing the rest of our publically held Outer Continental Shelf fishing grounds.  Find also the 2nd “OCS 5 Year Plan” (now in year 1 of the 2012-2017 Plan after completing the 2007-2012 Plan), find on the API site or on www.NOIA.org or this arm twisting letter to the Obama Administration from Randall Luthi the president of oil lobbying group NOIA or National Ocean Industries Association. http://www.noia.org/website/article.asp?id=53449

Proven again and again: 99.9 % (…I’m being kind) of anything Pew (or EDF, CLF, Oceana, Lenfest, etc.) claims about fishing qualifies for the category of downright bunkum.  Telling lies about commercial fishing is the way they make their money from contributions and do the bidding of the Oil-igarchs and their long term goals of clearing off the outer continental shelf and building there an Industrial Water Park.

They (Pew, Lenfest, Oceana, EDF, etc.) are presently working on eliminating the East Coast Menhaden fishery (aka Bunker, Pogies) after going after West Coast sardines recently.  The oil barons are very interested in the ocean bottom just off of Virginia and it’s no coincidence that the Menhaden industry is centered in that same area.  The enviro-fraud is that this is all part of the “save the forage fish” campaign, simply another strategy to shut down all the fisheries they can.  It’s a relatively recent anti-fishing angle and bogus as usual, the forwarded article below explains some of their lies and manipulations.  They’ll be out for our Squid and Scup and Whiting soon, which more or less fall into the same category of the boom and bust type species.
http://www.savingseafood.org/alerts/providence-journal-analysis-finds-pew-environments-menaden-claim-mostly-f-2.html
Actually, a “forage fish” is any fish that a larger fish can get into his/her mouth.  The fish that Pew is calling “forage”, i.e., Menhaden, Herring, Sardines, Anchovy, Squid, and Mackerel, Scup, and Whiting, are most of the time amazingly abundant.  But, their populations vary along with everything else in nature, i.e. variations in wind, currents, air and water temperature food supply, spawning conditions, abundance of a particular predator.

These fish are prolific breeders when conditions are right.  They are short lived and populations go through boom and bust naturally. These stocks can vary widely and have done so forever; and because of this fact, population statistics can be selectively manipulated by choosing a particularly scarce or abundant year to “prove” statistically just about anything. Squid for instance live for approximately one year; but, when conditions are good their eggs cover the bottom and are so thick they’ll plug the net and almost stop the boat. The following year’s spawn might be a fraction of the previous year’s for a myriad of factors, the least of which is fishing mortality.

The fact is that fishermen cannot work on depleted stocks.   When a particular species is scarce, boats will either stay at the dock, or re-rig for something else, another species that’s abundant that year or that season.  The fact is also that fish regulation is big business, bigger than the business it claims to regulate.  The more alarming the claims, the more the tax-sheltered contributions flow, from both the duped general public and the overlord corporate boards and the more relevant the hoards of “fish management” jobs at NOAA appear.

The notion that a handful of coastal fishing vessels could influence the population health of fish that show up in schools so abundant that they are referred to in terms of “shoals” is complete nonsense. These short lived prolific breeders have always had radically fluctuating populations depending on many radically fluctuating biological factors.  Trying to micro-manage and control these stocks is laughable, a fool’s errand.

The real eco-tragedy is that these NGO shysters, with their campaigns of lies, have discredited the entire ecological movement, the need for which is becoming more evident every day in terms of climate and air quality and ocean temperature, etc.  But these scam artists at Pew, EDF, and CLF are the oil companies, the actual polluters, so they certainly won’t bite their own hand and engage some of the real threats to the atmosphere that they are helping to create.

They continue to go after the fishing communities, the “little people”, who are real easy to catch.  All of this anti-fishing nonsense creates a great diversion for the oil barons’ takeover of the oceans.  Comments

OUT TO CATCH THE LAST FISH

It’s really getting old hearing this overfishing nonsense all the time.  To be a fisherman these days is to be able to understand the GEICO Caveman’s dilemma, that is, being bombarded, at every turn, with insults from NOAA’s incompetent stock assessments, mindless regulations and their irresponsible administering, but especially the anti-fishing Swift-Boating type media campaigns of lies proffered by the “Environmental” Non- Government Organizations.  Misinformation gems such as, “fishermen are out to catch the very last fish in the ocean”, and “…sophisticated electronic fish finding gear enables stock decimating catches”, or one of my favorites, “…dragging nets the size of a Boeing 747 that clear cut the ocean bottom”; these ridiculous perspectives then saturate the media, hoodwink the public, turn up in “scientific” papers, and too often, make it into fishery regulations.

Everyday people (not working for the government or taking a check from the Environmental Non-Government Organizations) who believe this garbage are either not thinking, or must believe that we, like members of the energy industry and the financial industry, are interested in devouring our own future for short term profit bliss.

For those uninformed people here’s a News Bulletin:

Family owned and family financed fishing vessels CANNOT WORK ON DEPLETED STOCKS!!! On a strictly economic cost-effective basis, the slim profit margins of these small fishing businesses would not allow it; and in addition, the independent small boat fisherman has the most to lose if the stocks are not healthy.

It’s infuriating to hear that mindless refrain over and over…that fishermen are doing all they can to catch the “last fish”.

With costs at around $2,000 per day or more in overhead, fuel, and maintenance, for a vessel capable of going offshore in the winter—and with dock fish prices to the vessel often around or below $1/pound—does it sound like a viable business plan to risk the life and limb of 4 crew members, their families’ future income, and a very expensive vessel, in order to fish on skimpy endangered stocks, landing skimpy catches of skimpy endangered fish?

Not to mention the fact that, after what amounts to a million dollar investment of life savings for many fishermen who own their boat, does it make sense for them to risk all of that and destroy their future by chasing down and landing the “last fish”? Fishermen are NOT STUPID; and they are NOT GREEDY; and they are NOT CLEAR CUTTING THE OCEAN and they are NOT OUT TO CATCH THE LAST FISH!!! That would be more a Wall Street-market-capitalized-big-business-responsible-only-for their-quarterly-bottom-line tactic, NOT FAMILY FISHING BOATS! Fishermen have a very specialized set of skills that do not translate well into the career worlds of Home Depot, McDonald’s, or Intel micro-chip manufacturing. They want to continue to fish.  Fishermen have made the sacrifices for the last 20 years and the fish are more plentiful now than any time since NOAA began keeping records.  Overfishing is a fabricated myth. No one has more at stake in keeping the fish healthy than the fishermen.  It’s their life, their tradition, and their future.  Comments