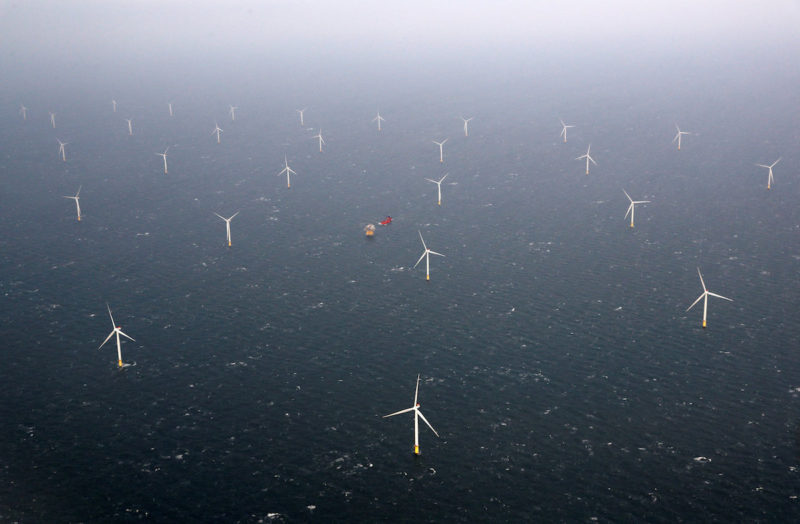 The U.S. government is apparently willing to destroy two of the most valuable fisheries on the east coast for the good of, are you ready? Foreign companies. The companies that have won the lease rights from the Bureau of Ocean Energy Management, [BOEM] are almost all primarily from Europe, Equinor is Norwegian, Orsted is Danish, Dong is multinational and based in the Cayman islands, which should tell you all you need to know about them as that is the tax shelter of every scoundrel in the world. Our politicians claim that the wind farms will create thousands of jobs, yet the turbines are built in Europe and will be shipped over for assembly. Because the US has no ships presently capable of handling 300 foot long turbine blades, [made of unrecyclable fiberglass] congress has passed legislation to exempt these foreign ships from the legal requirements of the 100 year old Jones act which was created to protect US shipping industries from foreign competition, requiring any US ships doing business in our territorial waters must be built in the US. That’s quite something since congress can’t find the time to pass critical health care legislation, or infrastructure bills.

No question about it, wind farms will create jobs, and good ones at that, hence the unions are all for them. Unfortunately most of the jobs will be temporary, during the planning and construction phase, after that its just maintenance. Which by the way will be enormous because no one has ever put wind farms in water so deep offshore and in the harsh north Atlantic environment before. Expect the windmills to have about half the life expectancy that they are claiming, and maintenance costs to far exceed expectations. What does that mean to you, the poor homeowner, or renter who needs electricity? Expect the cost of your electric bill to triple, as it has done in Europe. Wind farms will be the largest tax increase in history by the time it is said and done.

Why are windmills suddenly the answer to all our energy needs? They were obsolete one hundred years ago, but now are suddenly going to save the world, despite the fact that they have enormous environmental effects themselves, including avian genocide, besides the marine problems mentioned previously. Also, offshore wind will be most productive at the time we need it the least, the winter, which means expensive investments into energy storage facilities, or as they are now doing in Europe, paying the windmills more to shut down than for when they produce electric. What ever happened to solar energy, it seems like it has been forgotten, yet here is an energy source that has, once installed, a totally negative effect on the environment. It also produces its best energy at the time when we need it the most, the summer, peak season. Advances in technology have decreased the price so that it truly is competitive on the energy market, yet all subsidies have dried up, and the only solar being proposed is large farms owned by corporations. Why is this? Wouldn’t you think that investing in the localized production of electricity by individual homes and buildings which will result in a direct lowering of a person’s electric bill be a no brainer? Ask your self, would you rather have solar panels on your home and a lower electric bill, or would you rather pay exorbitant rates to an electric utility, that’s busy destroying the environment they are claiming to save?

There is presently another clean energy option that can be utilized immediately to meet the needs of the northeast, and that is to purchase energy from Canada where the construction of four new hydro electric plants has left them with a huge surplus of electricity. This should be a no-brainer but of course because so much money has now been invested in offshore wind I doubt it can be stopped, or even slowed down. Investors want immediate returns on their money which is why much of the green energy projects that get built, end up being refinanced soon after. Another option that needs serious consideration is the use of the floating platform wind turbine, where the turbine is mounted on a large bargelike vessel and deployed in deeper water off of the continental shelf where the turbine would have less environmental effects, and the siting and construction would be minimized. This technology is developing rapidly and is being planned for use off the U.S. west coast, where there is little to no continental shelf. Floating technology eliminates almost all interactions with the fishing industry and seriously reduces the environmental effects of all stages of the presently planned windfarms.

This brings us to the real question. How can an energy source with so many questions about its cost, and the effects it may have on the environment it is supposed to save be rammed down our collective throats without much opposition? Why aren’t the environmental crusaders, that previously have been so busy suing the NMFS to save the fisheries, raising the alarms about the marine issues I have raised? Have they been drinking from the waters of corporate contributions to their cause to buy their silence? Money can buy almost everything, in this case it buys hypocrisy. Many people in the fishing industry have been approached with the possibility of good paying jobs as liaisons, or to lead newly created fishing organizations that support windmills, and most have turned them down. The wind mill companies have been spreading around money like free peanut butter on bread, it seems like they have promised something to everybody, so that they can get their way.

There is no truer axiom then follow the money, so let’s do a little research and speculation. According to the “Clean Energy Impact Report” by Goldman Sachs in 2012, they established a target to finance and invest forty billion dollars in clean energy globally over the following decade. Just over four years later, they achieved this initial goal. In November 2015, they increased their existing target to 150 billion by 2025, expanding their ambitions and underscoring their commitment to mobilizing capitol to scale up clean energy and foster sustainable economic development”. Truly a noble cause, without financing and people willing to risk money societal progress would not take place. By deciding that wind was a better alternative than solar because their investors would get a better yield than if the average citizen was allowed the ability to invest in his own roof mounted solar system, the game then was to propagandize the sky is falling and we must save the world, by utilizing their multi-media mouth pieces. Offshore wind was targeted as the energy source with the most potential profit, not because of its economic efficiency but because they knew that no matter what, they could just increase the electric rates of a captive audience. It’s for a good cause after all.

But how could you do that on the east coast when you have a New Jersey governor [Chris Cristie] whose administration stymied any offshore wind project that was proposed? The answer in true Goldman Sachs tradition was to elect their own governor who would enact their projects. Just like Jon Corzine was elected to steer state and municipal bonds to Goldman Sachs for servicing the states debt, Phil Murphy appears to be the guy to shove windmills down everybody’s throat, like it or not. Governor Murphy has been virtually invisible in every aspect of his administration except for windmills. It’s hard to believe that a Goldman Sachs executive would give up that prestigious life and salary so that he can go on a Don Quixote quest to save the world, from a not quite certain fate. This is purely speculation on my part, but it sure makes sense if you think about it.

With Murphy in place, a race to propose and generate the most gigawatts of power was on between Murphy and Governor Cuomo of New York. Massachusetts and Rhode Island both had a head start on offshore wind but they have been overtaken by the New York Bight two-some. Windfarms are proposed from Cape Hatteras to Nantucket and the long term effects of their construction and operation is totally unknown, but those effects will not all be beneficial if they are at all. So much money is being thrown around by the windmill supporters that it makes your head spin. In New Jersey State Senator Steve Sweeny made sure to get his piece of the pie by having an important staging area for windmills in his district. I’m sure this is true in all the states, everybody’s hand is in the pie, except the general public who is going to get a pie in the face. So in answer to the question, “Why the big rush for offshore wind?” the answer appears to be because a lot of people are going to make a lot of money, and it will be your money they’re taking. I personally think its time for an FBI investigation into what has been taking place.